According to fellow scientist, Joseph Priestly, Ben Franklin performed his famous kite experiment in June 1752. Franklin had been interested in “electric fire” for quite a while and had an on-going dialogue with other scientists of his day about the phenomenon. His famous key experiment established that lightning was a form of electricity. 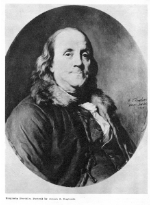 There are a couple of myths about this famous experiment though. First, the kite experiment did not help Franklin “discover” electricity. Humans had known about electrical forces for more than a millennium. What it did do was establish the connection between electricity and lightning, and it ultimately led to Franklin’s refinement of the of the lightning rod. These devices are still used today on taller buildings to help channel the electric charge from a lightning bolt safely to the ground.

Also, neither Franklin nor the kite were actually struck by lightning. (He likely would have died if either had happened!) The wet hemp string that he attached to the kite was a good conductor of electricity, and they key attached to the string picked up electrical charge from the air in the active storm.

While we would not recommend that you replicate Franklin’s experiment, there are some easy ways to investigate static electricity at home and remember Franklin’s contributions to STEM.

Here’s what you do:

Be sure to check out more from Family Science & Engineering guidebook for more ideas to inspire engineering exploration!