Million Women Mentors supports the engagement of one million Science, Technology, Engineering and Math (STEM) mentors (male and female) to increase the interest and confidence of girls and women to persist and succeed in STEM programs and careers.

MWM is an initiative of STEMconnector in collaboration with over 60+ partners reaching over 30 million girls and women, 45+ corporate sponsors, and 35+ state leadership teams. 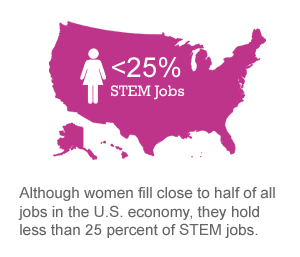 In the past 10 years, growth in STEM jobs has been three times greater than non‐STEM Jobs. 80% of the fastest growing occupations in the United States depend upon mastery of mathematics and scientific knowledge and skills.

While women comprise 50% of the US workforce, just 24% are in STEM fields, a statistic that has held constant for nearly the last decade. Almost one‐third of all male freshmen, compared with only 15% of all female freshmen, plan to major in a STEM field even though 15 out of the 20 fastest growing occupations in 2015 are expected to require science or mathematics training.

Too many of these women leave STEM degree paths despite their good academic standing, often citing uncomfortable classroom experiences and climate. Even when women persist to earn a STEM degree, women are less likely than their male counterparts to work in a STEM field.

Mentorship provides young women and girls access to STEM professionals outside of their personal networks, and opens their eyes to education and careers they may not have previously known about or considered. This effort will require action from many people to achieve its desired impact, and pledging to facilitate this initiative will help get us one step closer.